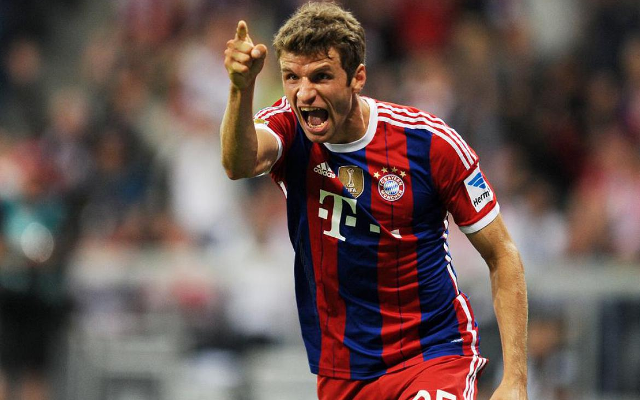 German source Sport1 on Tuesday morning claimed that the Red Devils are readying a €100m (£70m) offer and a five-year contract for the Germany international to sign, as Louis van Gaal is prepared to increase his efforts to land the forward.

According to the report, the Premier League giants are not concerned by a transfer fee, and may therefore be unafraid to spend big to entice the Bundesliga champions into doing business once more this summer following Bastian Schweinsteiger‘s Old Trafford transfer [via BBC Sport].

Muller’s club-captain Philipp Lahm has admitted his uncertainly over the 25-year-old’s future, and has refused to provide assurances that his team-mate will spurn interest from van Gaal in the coming weeks:

“It’s not my decision. Things can happen very quickly,” as quoted by Sky Sports.

“I certainly can’t provide any guarantee for Thomas Muller (staying).”

Following the departure of Allianz Arena legend Schweinsteiger, who made his debut for United in the victory over Club America last Friday [via the Daily Star], it would certainly come as a shock if Pep Guardiola, too, gave the green light on Muller to emulate the 30-year-old’s move to the Theatre of Dreams.

Having sold Robin van Persie to Fenerbahce last week [via BBC Sport], van Gaal may be in search of a replacement, as Wayne Rooney remains the club’s solitary senior centre-forward.

Muller is renown for his versatility in attack – able to play as a leading striker, as well as a No.10 and a wide player – yet with Robert Lewandowski likely to remain as Guardiola’s first-choice up front, the lure of perhaps spearheading the Red Devils attack could prove key in helping decide his future.