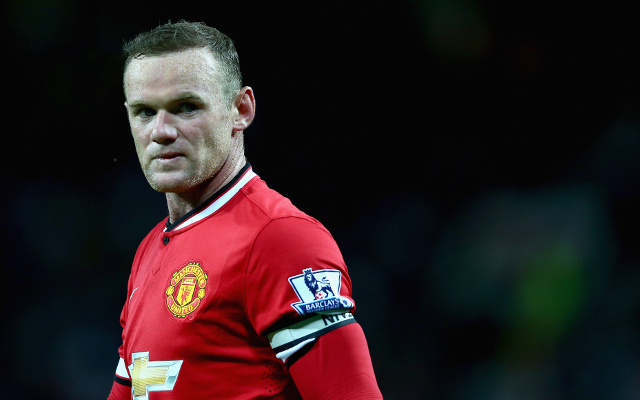 Manchester United striker Wayne Rooney is ready to save manager Louis van Gaal money in the transfer market by insisting he can fire the side to Premier League glory in the upcoming season.

The departures of Robin van Persie and Radamel Falcao during the summer has left the Red Devils a little light in the centre-forward department as only Rooney and Javier Hernandez are the recognised out-and-out strikers left at the club.

This has led to speculation in the media that van Gaal is on the lookout for a new hitman and has been linked with the likes of Paris Saint-Germain’s Edinson Cavani [via Guardian Sport] and Bayern Munich’s German World Cup winner Thomas Muller [via talkSPORT].

However, it would appear the Dutchman might not need to splash out on a new striker as his club captain insists he’s eager to improve on the 12 league goals he managed last season:

“I’m ready to take on that mantle again and be the one who gets the goals for this team,” the England national team skipper said [via Mirror Sport].

“Hopefully I can get a good run of games and repay the manager and score goals for the team.”

“I’ve played different roles over the years for United but you only have to look when I play for England as a striker I score goals. I hope to score 20 or more goals again. If I’m playing as a striker, then I will be disappointed if I can’t do that again,” Rooney added.

Rooney failed to find the back of the net for the Red Devils in the final six games of the 2014-15 season and his last was a stunning effort against Aston Villa at Old Trafford at the start of April.