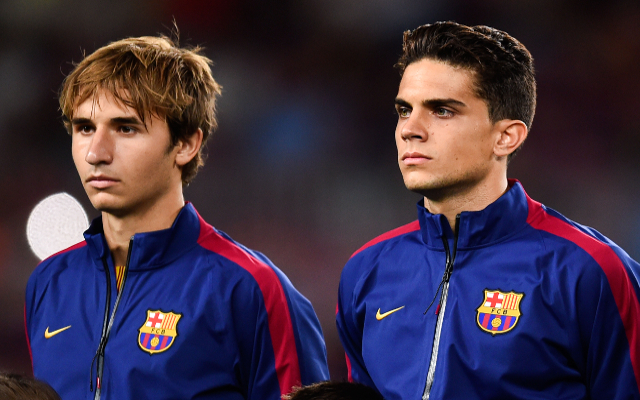 Arsenal are ready to fork out the €12m (£8.4m) needed to trigger Barcelona youngster Sergi Samper’s release clause according to El Mundo Deportivo.

The 20-year-old is currently in North America as part of Luis Enrique’s pre-season tour squad and is a player with a bright future who is yet to make a real impact at the Nou Camp.

El Mundo Deportivo claim Arsene Wenger sees the Spanish Under 21 international as a successor to veteran midfielder Mikel Arteta, who missed most of last season through injury.

The defensive midfielder made his first team debut last August but is yet to feature in La Liga and could struggle to force his way into Enrique’s first team set-up with the likes of Sergio Busquets, Ivan Rakitic, Rafinha and Sergi Roberto ahead of Samper in the pecking order.

Arsenal transfer news.
Arsenal star in talks to complete move to Serie A side AS Roma
Petr Cech’s transfer to Arsenal is ‘KILLING’ Jose Mourinho according to former Chelsea assistant manager [Video]

Arsene Wenger was indebted to Francis Coquelin last term, the Frenchman impressing greatly after being ushered back into the Gunners set-up from his loan spell at Charlton Athletic, with the North London side certainly lacking in terms of real quality in terms of holding and defensive midfield options.

Arteta has been in and out of the side over the past year whilst battler Mathieu Flamini has offered a rather one-dimensional option when called upon.

Arsenal have previously successfully raided Barcelona for the likes of Cesc Fabregas, John Toral and Hector Bellerin and Wenger will look to repeat the feat with Sergi Samper.