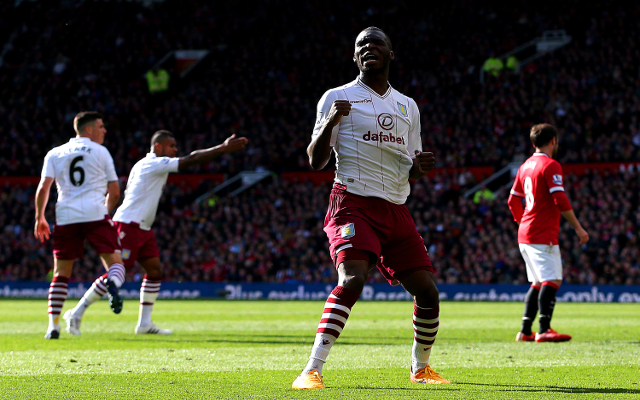 Liverpool will complete the signing of Aston Villa Christian Benteke today according to the Daily Mirror.

The 24-year-old enjoyed a rich run of form in the latter stages of 2014/15, netting 11 goals in his last 12 Aston Villa appearances, and will offer Brendan Rodgers a further attacking option for the coming campaign.

Man United are also said to be keen on Benteke (via the Daily Mail) with Louis van Gaal having sold his first-choice centre-forward Robin van Persie to Fenerbahce earlier this summer.

Benteke moved to Villa Park in August 2012 and bagged 23 goals in his debut campaign but saw his form dip over the course of the next 18 months before the powerful marksman once again got into gear following Aston Villa’s appointment of Tim Sherwood in February.

Aston Villa paid Racing Genk £7m (via the Guardian) for Benteke and the Midlands side stands to make a massive profit on their top-scorer and have been linked with moves to replace the player with Tottenham’s Emmanuel Adebayor (via ESPN).

Liverpool struggled for goals in 2014/15, their 52 goal tally for the season being way below the 100+ goals they managed in 2013/14, and now Rodgers finds himself with a vast array of options up front.

Thus far this summer Rodgers has signed attacking midfielder Roberto Firmino and Danny Ings, both of whom can score goals, whilst Mario Balotelli, Rickie Lambert, Daniel Sturridge and Fabio Borini also remain at the Merseyside outfit.

The Daily Mirror claim the £32.5m fee will make Benteke Liverpool’s second most expensive signing ever, Andy Carroll’s move from Newcastle United being the most costly in their history.