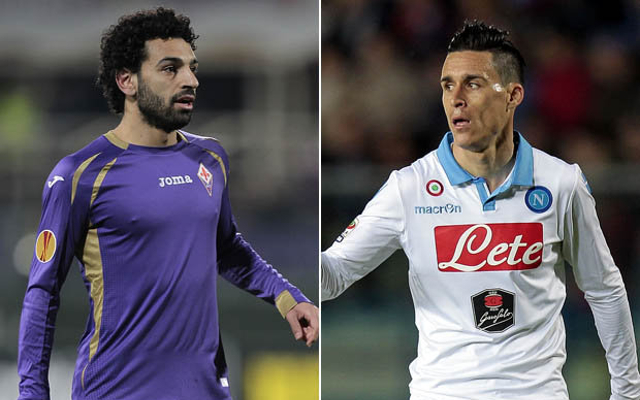 Chelsea winger Mohamed Salah has emerged as a transfer target for Serie A side Napoli and could be used in a potential swap deal which sees Jose Callejon move in the opposite direction, Star Sport reports.

The Egyptian appears to have no future with the reigning Barclays Premier League champions after spending the second half of last season on-loan with Italian giants Fiorentina, where he scored six goals in 16 league appearances, and two more in the Coppa Italia against Juventus.

Interest in Salah is high, as the Viola have been joined in the race to sign the 23-year-old by fellow league rivals AS Roma and Inter Milan. La Liga giants Atletico Madrid are also understood to be watching developments closely.

A switch to the Italian capital with Roma is thought to appeal to Salah, as the Giallorossi can offer Champions League football this season. However, Napoli are set to step up their efforts to tempt the player into settling for another season in the Europa League.

The Naples outfit, who finished fifth in Serie A last season, are reportedly willing to offer former Real Madrid winger Callejon in exchange for Salah and that proposal could appeal to Blues boss Jose Mourinho as he worked with the Spaniard between 2011 and 2013 whilst he was the manager of Los Blancos.

Mourinho has been linked with a host of midfielders during the summer transfer window, but as of yet he has not had much luck with strengthening in that department.

Highly-rated defensive midfielder Giannelli Imbula was said to be attracting interest from the West London outfit as a potential partner for Nemanja Matic in the engine room for the reigning champions of England [via Metro Sport], however the Blues lost out to Portuguese giants FC Porto for the 22-year-old’s signature [via Sky Sports].

Meanwhile hopes of bringing Brazilian international Douglas Costa to Stamford Bridge were dashed when Bayern Munich swooped in and signed the player for £21 million from Shakhtar Donetsk via [Mail Sport].