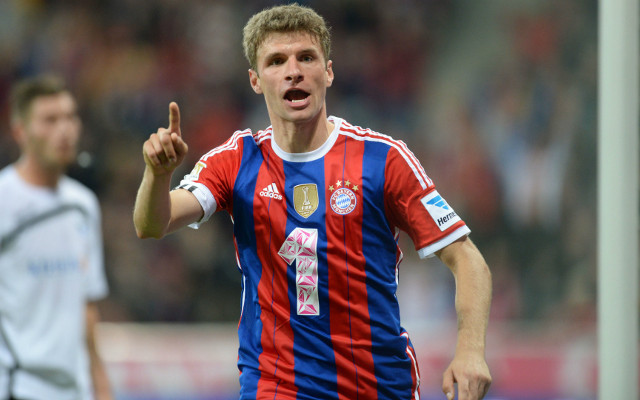 Bayern Munich CEO Karl Heinz Rummenigge has insisted that no other of Pep Guardiola’s players will join Bastian Schweinsteiger at Manchester United this summer.

Rummenigge may be addressing speculation concerning Thomas Muller, as German source Sport1, on Tuesday morning, stated that the Premier League giants were preparing a €100m (£70m) offer for the Germany striker, and the report claimed that Louis van Gaal is unafraid at spending big to secure the 25-year-old’s signature.

However, following Schweinsteiger’s arrival at Old Trafford, Rummenigge described the possibility of Muller joining his former team-mate in Manchester as:

“A flying duck over the ocean,” as quoted by the Daily Star.

Robin van Persie signed for Turkish heavyweights Fenerbahce earlier this month [via BBC Sport], and with Wayne Rooney the remaining solitary senior striker for United, van Gaal may be in search of competition for the England international in the summer window.

The former Netherlands manager recently suggested that United were in talks with a ‘surprise’ striker, as quoted by The Guardian; however, on Wednesday morning, the Dutchman rejected his own comments:

“I don’t know if I want to buy a striker because I have read in the media that a striker is the surprise. No, that I have not said. But you are saying that, because my answer is like that. No, I mean something else,” as quoted by the Express.

Nonetheless, while Rooney remains the Red Devils’ lone forward, Memphis Depay – having scored 22 goals last season from a wide role, the highest in the Dutch Eredivisie – could perhaps be deployed in a central attacking role in his debut campaign.

“I’m excited about scoring goals and giving assists. I’m a striker,” as quoted by the Mirror.