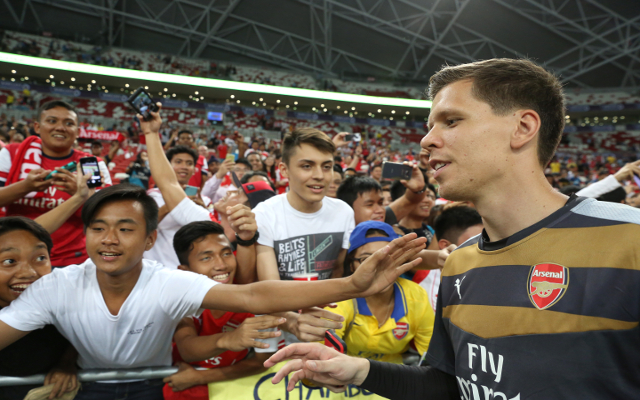 Arsenal goalkeeper Wojciech Szczesny is poised to join Serie A giants AS Roma on a season-long loan deal after the two clubs have agreed a deal, Guardian Sport reports.

Under terms of the agreement the Italian club can purchase the Polish international for just £3.5million next summer if they choose to turn the loan deal into a permanent one.

Szczesny’s imminent departure from the Emirates Stadium can be seen as further proof that David Ospina will begin the new season as the understudy to Petr Cech, who signed from London rivals Chelsea earlier in the summer.

Following a woeful performance against Southampton on New Years Day where Szczesny was at fault for both goals in the 2-0 defeat at St Mary’s, he was caught smoking in the showers after the game [via Guardian Sport] and was subsequently dropped as the club’s first choice keeper.

He would keep goal during the club’s FA Cup campaign from the fourth round onward and kept a clean sheet in the final against Aston Villa, but that appears to have been his last action in a Gunners shirt at least for a year.

A move to Italy will certainly benefit Szczesny as regular first team football will improve his chances of being named in the Poland squad for next summer’s European Championships should they qualify from their group.