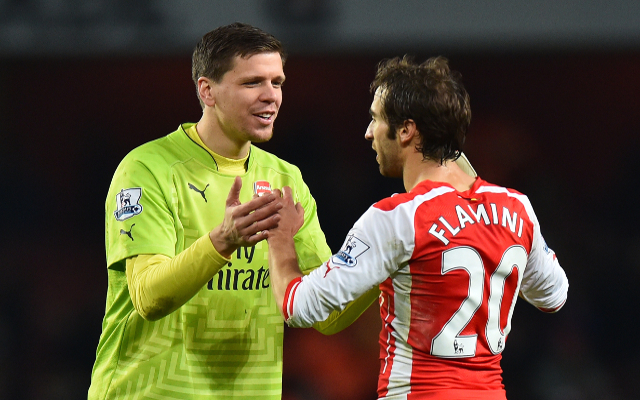 25-year-old Polish international Szczesny lost his first team starting spot to David Ospina mid-way through the 2014/15 campaign and the arrival of Petr Cech from Chelsea will lead to intense competition for a starting spot in Wenger’s starting eleven.

The Daily Mail state that Gunners fan favourite Szczesny will move to the Stadio Olimpico on an initial season-long loan deal.

The same source claim that defensive midfielder Mathieu Flamini is set to complete his move to Turkish giants Galatasaray having fallen down the Arsenal pecking order.

The experienced French international is into his second spell at Arsenal but is a shadow of the player who impressed in his first spell at the club.

Francis Coquelin emerged as a player of real quality last season, the midfielder being ushered into Wenger’s first team set-up from his loan spell at Charlton Athletic, whilst Mikel Arteta is also ahead of Flamini in the Arsenal pecking order.

Arsene Wenger has already offloaded a number of under-performing members of his Arsenal squad with the likes of Lukas Podolski, Ryo Miyaichi and Abou Diaby having left whilst youngsters Yaya Sanogo and Carl Jenkinson have been sent out on loan to Ajax and West Ham respectively.