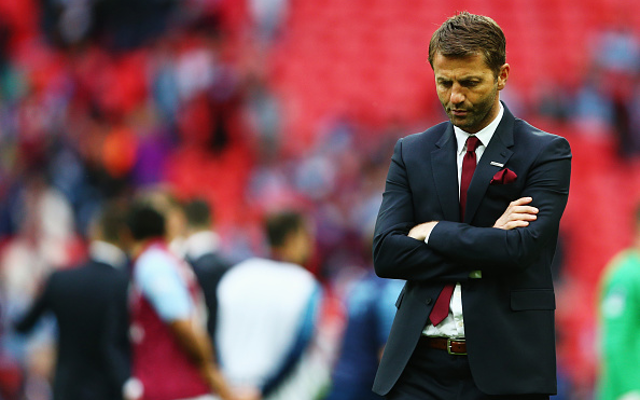 Aston Villa are planning to replace the departed Christian Benteke with the potentially menacing tandem of Islam Slimani and Emmanuel Adebayor.

The Mirror report that Tim Sherwood is targeting the pair to make up for the departure of Benteke, who completed his £32.5 million transfer to Liverpool earlier this week [Telegraph].

Villa risk being in disarray ahead of the coming campaign, having lost their best defender, Ron Vlaar, their best midfielder Fabian Delph, and their key offensive presence in the Belgian hitman.

Sherwood has long been linked with a move for Tottenham’s Adebayor, who had emerged as a potential candidate to exchange places with Benteke earlier in the summer [Express].

The English coach transformed the fortunes of the Togo hitman during his spell as Tottenham coach, and would surely be hoping of getting the best out of the veteran West African at Villa Park once again.

The Mirror understand that Sherwood remains hopeful of a deal, and is planning to return to White Hart Lane imminently with a new offer for the ex-Arsenal man.

Villa are also understood to be keen on Andros Townsend, who the Mirror understand, is keen to seek regular first-team football ahead of the 2016 European Championships [Birmingham Mail].

Adebayor could be joined at Villa Park by Algeria striker Islam Slimani.

The Sporting Lisbon hitman Islam Slimani is also on the Birmingham outfit’s radar.

The 27-year-old is a lethal presence in the box and is a mobile presence who could prove to be an excellent foil for Adebayor.

However, should the Villains look to move for the Algerian, they may yet face competition from Leicester City and West Ham United, both of whom have been tracking the £12 million forward [talkSPORT].