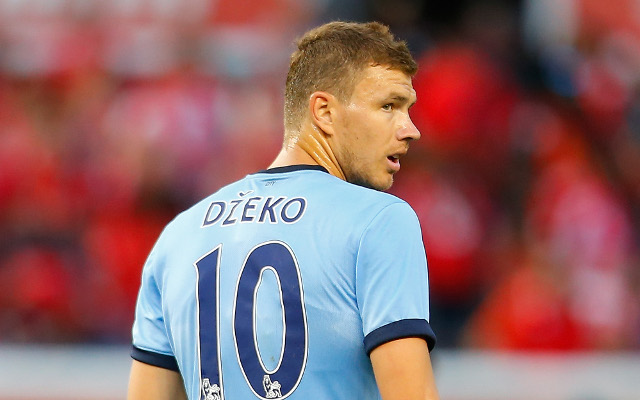 According to ESPN, Manuel Pellegrini is set to receive an offer from the Serie A outfit for his No.10 – with the report stating that Rudi Garcia has been chasing the centre-forward’s signature for the entire summer thus far.

Speculation intensified on Dzeko’s future at the Etihad this week – when Pellegrini admitted that he was uncertain whether the Bosnia and Herzegovina international would remain with the two-time Premier League champions after sitting out their pre-season win over Roma on Tuesday:

“Edin didn’t play the last game as it’s not clear if he will continue here or not, but he is still working here with the whole squad,” as quoted by BBC Sport.

The 29-year-old made 22 Premier League appearances last season; however, 11 of those came from the substitutes bench, and the former Vfl Wolfsburg star may consequently consider his future bleak in Manchester.

Dzeko may not be the only attacker addressing his options this summer, as Stevan Jovetic has also been linked with an exit.

Inter Milan are said to be on the verge of reaching a €3m loan agreement with the Montenegro international, according to Goal.

With the arrival of Raheem Sterling from Liverpool and Fabian Delph from Aston Villa [via Sky Sports] – the duo could certainly see their time increasingly limited next season.