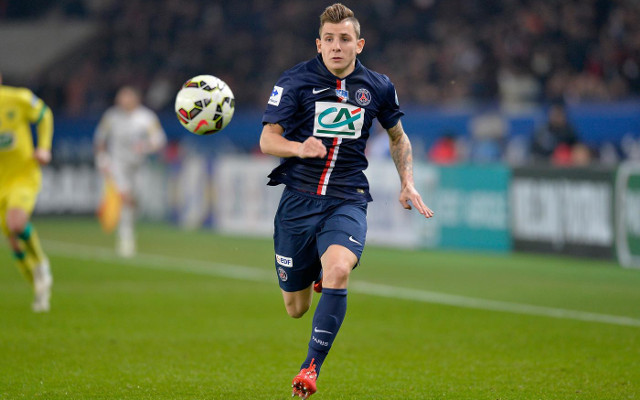 Liverpool have been handed a boost in their pursuit of Paris Saint-Germain’s Lucas Digne, as manager Laurent Blanc has revealed that the left-back has voiced his desire to depart the Parc des Princes this summer.

The Mirror claim that Brendan Rodgers is keen on the 22-year-old – who has struggled to make an impression in the French capital – and could be buoyed by the comments of Blanc:

“First, it is he who very clearly asked to leave,” as quoted by the Mirror.

“For now, he is with us, he is very professional, he trains very well and has prepared excellently. He has shown the results in friendlies.

“This is firstly a very good thing for him and possibly for us, should he stay with us this season.”

Digne signed for the Ligue 1 giants in June 2013 and put pen-to-paper on a five-year contract.

However, the defender was handed just 14 starts in France’s top flight and a single substitute appearance in the Champions League last season – and may have grown disillusioned with his lack of playing time in Paris.

However, it’s also improbable that the France international would be guaranteed regular first-team action at Anfield, with the Merseyside heavyweights having paid £12m for left-back Alberto Moreno last summer [via BBC Sport] – who featured regularly in the Premier League in his debut campaign, making 26 starts.

What’s more, having already signed right-back Nathaniel Clyne from Southampton, along with securing the signature’s of attackers Roberto Firmino, Danny Ings and Christian Benteke, the addition of a new left-back would certainly make for a hugely revamped Rodgers side – and could perhaps be considered an unnecessary acquisition.