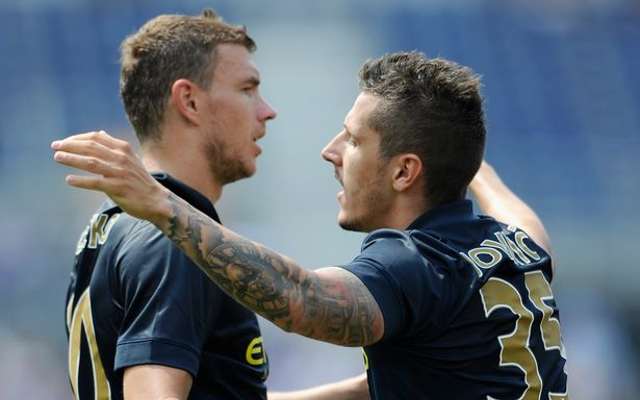 Roberto Mancini has admitted that he is keen to bring Manchester City forward Stevan Jovetic to Inter Milan, as the Montenegrin nears a departure.

It looks certain that the forward will leave the Etihad Stadium this summer, with Citizens coach Manuel Pellegrini leaving Jovetic and another potential departee, Edin Dzeko, out of the club’s pre-season friendly victory over AS Roma [Manchester Evening News].

The forward has been linked with a move to Liverpool [Daily Mail], as Brendan Rodgers continues to seek players who could contribute the goals lost when Luis Suarez moved to Barcelona last summer.

However, the Reds look likely to miss out, as Inter Milan appear to be on the verge of securing the forward’s signature.

Ex-City boss Roberto Mancini, who is currently in situ in Lombardy, has spoken about the impending signing of the Eastern European star.

“We really need an attacker because we only have two players up front at the moment.

“I already tried to sign Jovetic in my last season with Manchester City but he arrived when I was gone,” the Italian manager began, as reported by Sky Sources, via the Mirror.

“He can play as a focal point or as a support striker but could also feature on the wings.”

The English tabloid report that the forward is set to sign a two-year loan deal with the fallen giants of Serie A, with Inter then in a position to buy the player—who would then be 27—at the end of his spell at the Giuseppe Meazza.

Since arriving at City for £22 million in 2013 [BBC Sport], Jovetic has struggled with injury, and ends his spell at Eastlands with only eight goals in 30 Premier League outings.