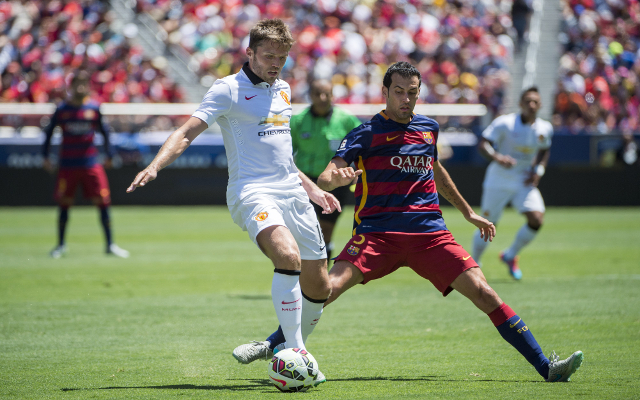 Man United have turned down moves from Newcastle United & Inter Milan for veteran midfielder Michael Carrick according to the Sunday Mirror.

The 33-year-old England international was one of Louis van Gaal’s best performers in 2014/15 but is clearly in the latter stages of his career.

The Sunday Mirror claim that Carrick still has a vital role to play in the coming season and his pendulum-like performances offer van Gaal a hugely consistent weapon to call upon.

Carrick originates from the north-east and is a player Newcastle United manager Steve McClaren will know well from his time in charge of the England national team set-up.

McClaren has been backed heavily in the transfer market by owner Mike Ashley this summer with the Magpies having secured the signings of Dutch international Georginio Wijnaldum from PSV Eindhoven and Anderlecht forward Aleksandar Mitrovic.

The two exciting young talents will offer a real cutting edge in the final third and Newcastle United will hope to improve on last season’s disastrous campaign.

The St James’ Park side only retained their Premier League status on the final weekend of the season, with their win over West Ham being enough to keep the club in the English top tier.

Carrick moved to Man United from Tottenham in 2006 and has made 379 appearances for the club.

Man United handed Carrick a one year contract extension in March (via official club website) which expires next summer.