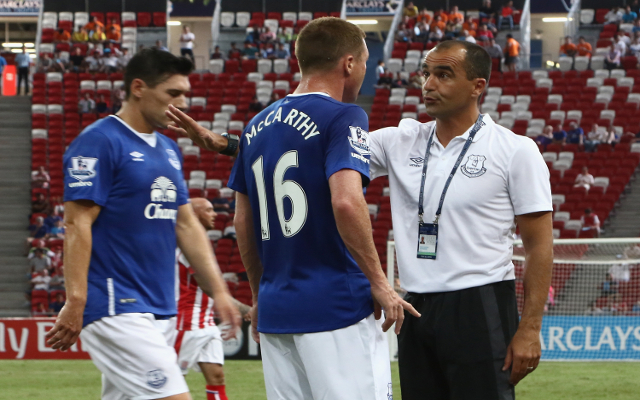 Tottenham are set to open talks with Everton as Mauricio Pochettino continues to pursue Toffees midfielder James McCarthy according to the Daily Mirror.

The Scottish born Republic of Ireland international has impressed since his move from Wigan Athletic to Goodison Park two years ago and is certainly one of the best central midfielders outside the top four.

The Daily Mirror claim the 24-year-old is unhappy that his Merseyside employers are yet to hand him a new improved contract and this has led to speculation over a possible summer exit.

McCarthy followed manager Roberto Martinez from Wigan Athletic to Everton and is a player the Spaniard would be loath to lose.

James McCarthy is said to be a player who interests Liverpool, Arsenal and Man United (via the Daily Express) and a player who cost Everton £13m two years ago (via The Independent).

Pochettino has sold a number of under-performing players this summer and among the exit bound throng were a number of midfielders who had failed to impress at White Hart Lane.

The Argentine manager offloaded Paulinho, Etienne Capoue, Lewis Holtby and Benjamin Stambouli in deals that have left the North London side light on options in the centre of the park.

McCarthy has made 76 appearances for Everton and has completed nine seasons of professional football having made his debut at Scottish side Hamilton at the age of just 15.