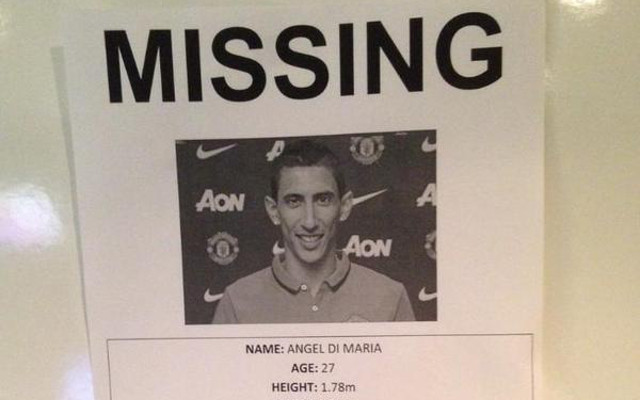 Missing posters featuring the 27-year-old have been seen in Manchester after this startling revelation. The Argentina international has failed to link up with the squad in America, and this has caused his boss’s statement.

“I don’t want to answer that,” van Gaal said when asked on the player’s whereabouts, “But you can keep asking.Maybe you know where he is. I don’t know.”

The forward has been heavily linked with a move to PSG [Daily Express], and this could be why the player has failed to report to pre-season. It is possible that he is just wrapping up the final details of his move, and doesn’t want to slow it down by linking up with the squad.

With this development hinting that a deal is very near to completion, it could mean United are also set to finally confirm their move for Barcelona ace Pedro [Daily Express]. Being able to play on either wing, the Spain international could be the perfect replacement for Di Maria.

SPOTTED: These posters have been found around Manchester today after LVG revealed he doesn’t know where Di Maria is. pic.twitter.com/KRyMDdHf9I