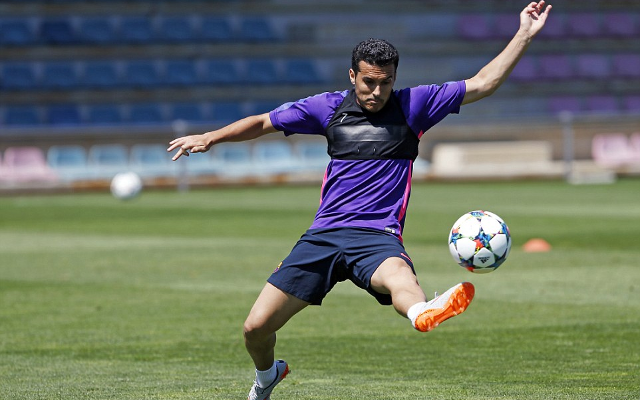 Manchester United will be made to wait to sign Barcelona winger Pedro this summer, but reports in Spain suggest this deal is as good as done and set to go through after the 11th of August.

According to Marca, United and Barca have come to an agreement over a fee for the 27-year-old wide-man, with the Premier League giants set to pay the Liga BBVA champions €30m plus potential add-ons of €2m. However, manager Luis Enrique wants to keep him around until after his side’s tie against Sevilla in the UEFA Super Cup.

This comes after strong speculation that United attacking midfielder Angel Di Maria is closing in on an exit from Old Trafford this summer, with The Guardian claiming he will be moving to Ligue 1 giants Paris Saint-Germain for around £40m.

With Di Maria’s exit potentially leaving United short of options out wide, it is little surprise to see Louis van Gaal’s side move for a player of Pedro’s calibre, with the Spanish international similarly experienced in winning major honours with big clubs, having shone for much of his career at the Nou Camp.

The forward rose through the ranks with the Catalans, and went on to become a key member of the side that won the 2010/11 Champions League as well as numerous other honours, though he featured less often last season as Enrique led the club to the treble.

With Luis Suarez and Neymar now ahead of Pedro in the pecking order to partner Lionel Messi, it also makes sense that the player himself has seemingly accepted the move to the Red Devils, where he looks set to be more of a regular starter.