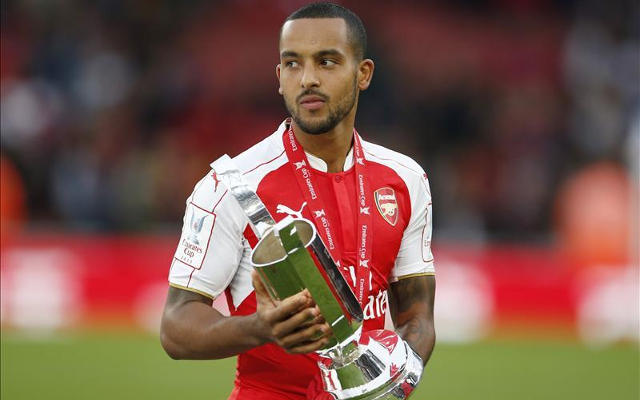 Arsenal have confirmed via their official site today that Theo Walcott has signed a new contract with the club, with reports elsewhere that he has penned a big-money deal for another four years.

BBC Sport journalist David Ornstein claimed via his official Twitter account that the England international would now be on wages of £140,000 per week, making him one of the Gunners’ highest earners.

This is a huge show of faith from manager Arsene Wenger in a player who has played just 27 Premier League games in the last two seasons. Injuries have massively held Walcott back in recent times and his record in that department has to go down as a worrying sign, though it could be that this new deal signals that the worst of his difficulties may be behind him.

Arsenal fans will be hoping Wenger knows what he’s doing here, and that Walcott is about to follow in the footsteps of former star striker Robin van Persie, who suddenly burst into top form in the 2010/11 season and stayed injury-free for around a year and a half, having previously been known as one of the most injury prone players at the Emirates Stadium.

Still, Wenger also has a less positive record in this department, having given Abou Diaby far too much time in north London despite the French midfielder clearly failing to stay fit after a horror-challenge in a game against Sunderland in 2006 seemed to mark a permanent change in his career.

Walcott has not had one big injury in quite the same way as Diaby, though he did miss about a year after going off on a stretcher in the FA Cup third round tie against Tottenham in January 2014. Still, upon returning to the team last season, he looked arguably sharper than ever, scoring in quick succession in games against Brighton and Aston Villa, and ending the season particularly strongly with a hat-trick on the final day of the Premier League season, and then the opening goal in the FA Cup final, again against Villa.

The signs are there that the 26-year-old could be about to ‘do a Van Persie’ and finally become a star for the Gunners; there is clearly room for another striker after unconvincing seasons from Olivier Giroud and Danny Welbeck last year, and the lack of a new signing in that area this summer suggests this could be the big change up front Wenger has in mind. It’s a big call, but the Frenchman has got it right before.