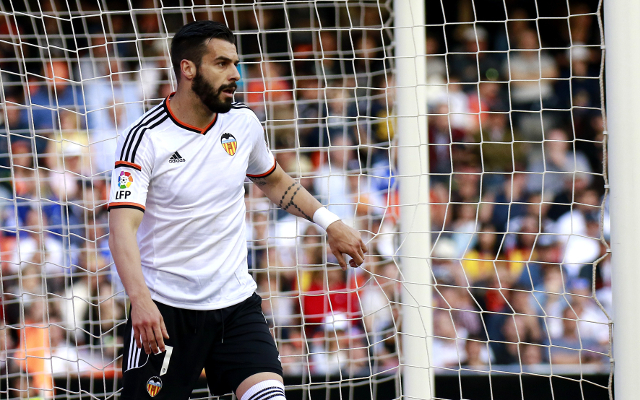 Arsenal and Liverpool are both reportedly keen on Valencia forward Alvaro Negredo according to Fichajes (via the Metro).

29-year-old Spanish international Negredo enjoyed just a single Premier League season with Man City before he was loaned out to Valencia, a temporary move that was made permanent at the end of 2014/15 (via ESPN).

The burly forward scored 23 goals in 2013/14 though his form took a nose-dive towards the end of the campaign, with the former Sevilla man going 16 games without netting, and found himself falling down the Man City striking pecking order.

The Mestalla outfit want €30m (£21m) for the experienced marksman according to Fichajes (via the Metro) and that seems a steep price to pay for a player who isn’t in the best of form.

The Anfield side struggled up front last term with Mario Balotelli, Rickie Lambert and Fabio Borini all failing to impress, whilst England international Daniel Sturridge was laid up with injury concerns for much of the campaign.

Arsenal manager Arsene Wenger has not been so busy in the summer transfer window with Chelsea’s Petr Cech being the north London club’s only major addition thus far.

The Gunners chief central striking weapon, Olivier Giroud, was impressive in patches last term but the Frenchman’s tally of 58 goals in 134 appearances could hardly be considered prolific.