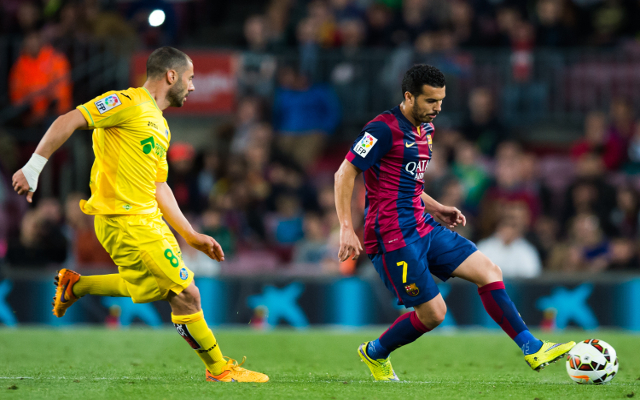 Catalan publication Sport has provided an update on two key pieces of Barcelona transfer news, with latest on a deal taking Pedro to Manchester United and Adama Traore’s possible switch to Liverpool.

The La Liga champions look set to do business with the two Premier League giants, with Sport claiming that Pedro is nearing an exit from the Nou Camp and heading to Old Trafford, with United chief Ed Woodward set to fly to Spain tomorrow to conclude talks and negotiate a transfer fee for the 27-year-old winger.

With BBC Sport also reporting that Red Devils midfielder Angel Di Maria had a medical with Paris Saint-Germain this weekend, it makes sense that manager Louis van Gaal has moved to snap up another wide-player to replace the Argentine flop, who performed poorly in that position last season.

Pedro could end up being an upgrade on Di Maria, with his more direct style of play and bigger goal threat perhaps more suited to what Van Gaal’s side need in that area, particularly as Robin van Persie and Radamel Falcao’s departures have left them short of goal threats up top.

Meanwhile, Sport adds that Barca youngster Adama Traore is set to fly to Liverpool for a medical with the Reds, though it remains unclear what kind of fee they will be paying for the 19-year-old.

With so many big names ahead of him in the pecking order in Luis Enrique’s squad, it is little surprise that Traore looks to be opting for a move to Anfield, where he can continue his development as one of the most promising young players to emerge from Barcelona’s youth system in recent times.