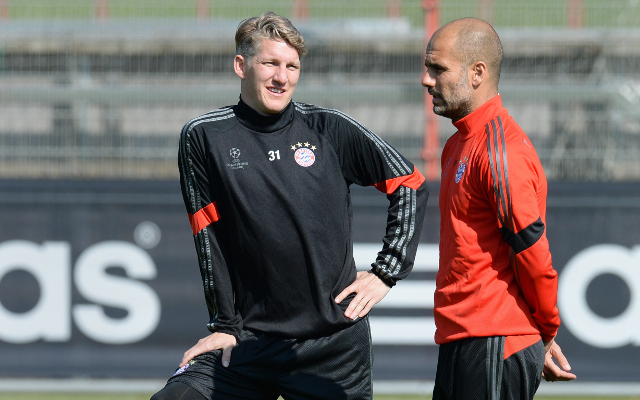 Bayern Munich manager Pep Guardiola has revealed his doubts as to whether Bastian Schweinsteiger will prove to be a successful signing for Manchester United, Mirror Sport reports.

The Germany national team captain brought an end to almost two decades of service to the Bundesliga giants last month as he completed his transfer to the Red Devils for a fee believed to be in the region of £14million [via Guardian Sport].

The transfer was somewhat of a shock as many expected the 31-year-old to retire at the Allianz Arena, but Guardiola hinted that Schweinsteiger’s fitness issues over the last couple of years was a main factor in his decision to let the midfielder leave the club and believes United fans will only get to see the best of the German if his injury woes clear up:

“When he does not have injury problems I am completely convinced he will do very well at Manchester United, the ex-Barcelona boss revealed.

“He is a top, top player. Unfortunately, the last three years he was never in good condition.”

“When he is in very good condition I am convinced he will be a good player for them. I really hope that is going to happen,” Guardiola added.

It must be noted that Schweinsteiger made just 15 league starts for the Bavarian outfit last season and that was his lowest number of appearances since the 2002/03 campaign.