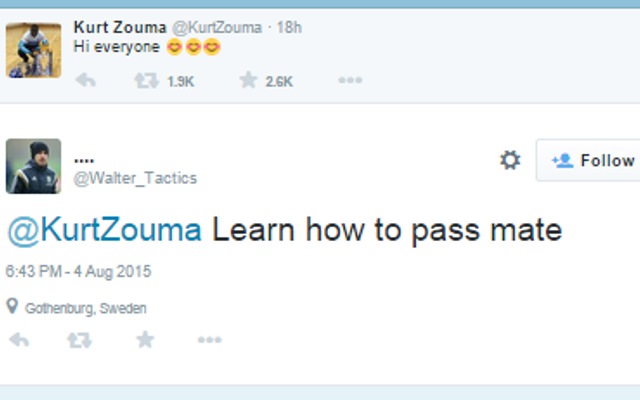 Kurt Zouma has finally got his hands on a Twitter account, but reaction to the Chelsea man’s baby steps on social media has not been wholly positive.

The 20-year-old, who moved to Stamford Bridge last year from Saint-Etienne, began tweeting on his @KurtZouma account on Tuesday…innocently sending a few tweets out to test the waters and figure out the difference between his hashtags and his hotlinks.

Initially, the response was warm, with Chelsea fans giving the new boy a fond welcome to his latest social platform of choice.

However, while no one took a moment to question why the French defender with ancestors from the Central African Republic has a German first name, they were quick to point out some flaws in the player’s game.

@Walter_Tactics was particularly biting with his welcome for the ex-ASSE star.

@KurtZouma Learn how to pass mate

The defender enjoyed an encouraging campaign last term, featuring at the base of midfield as well as in his primary position of centre-back.

The Frenchman may have to get used to this new role, with Jose Mourinho’s pursuit of John Stones, and John Terry’s recent revelations about his desire to emulate Ryan Giggs threatening to stand in the way of the youngster’s route to the starting XI.