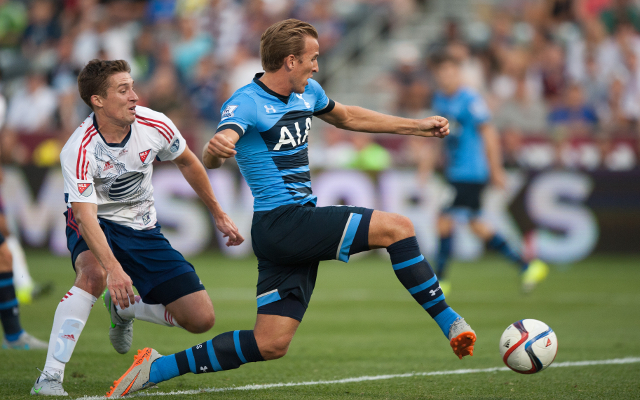 Manchester United have reportedly failed with a bid for Tottenham Hotspur forward Harry Kane, according to Spanish source Marca.

Last season, White Hart Lane boss Mauricio Pochettino was indebted to the 22-year-old forward, who bagged 31 goals in all competitions, but who was handed little in the way of support by his senior striking colleagues.

Roberto Soldado, Erik Lamela and Emmanuel Adebayor all resolutely failed to weigh in with an offensive contribution, the trio scoring just five Premier League goals between them, and it’s therefore not surprising that the North London side would fight to keep hold of Kane.

United have previously been linked with a £45m bid for the England international (via the Daily Mail) and this was prior to Louis van Gaal opting to sell Robin van Persie to Fenerbahce.

Despite Kane’s best efforts, his Tottenham side once again failed to secure a top-four finish and will therefore have Europa League football to look forward to in 2015/16.

Kane has represented Tottenham since the age of 11, and has come through the ranks at the club to become a key member of Mauricio Pochettino’s first team plans. He cut his teeth during numerous loan spells elsewhere, but finally reaped the rewards last season. However, he will have his work cut-out trying to replicate his superb from from last term.

Louis van Gaal has invested heavily in the summer transfer market, bringing in a host of top talents, with the captures of Bastian Schweinsteiger and Morgan Schneiderlin perhaps being the most impressive. The Dutch manager will hope his re-shuffled squad can mount a genuine push for major honours in 2015/16.