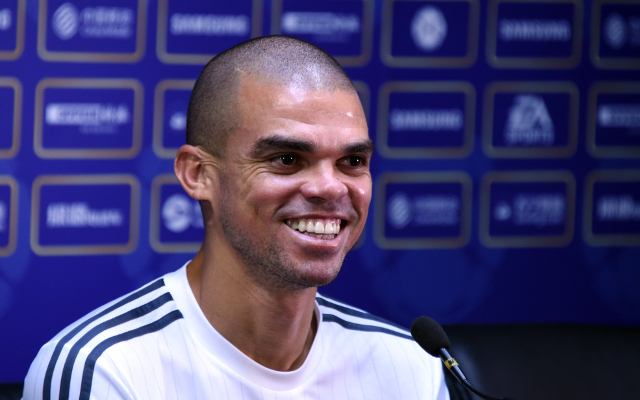 Real Madrid have offered the services of experienced centre-back Pepe to Manchester United, according to the Daily Mirror.

The 32-year-old has been a mainstay of the Bernabeu defence in recent seasons and has largely improved his previously-questionable discipline over that period. However, the Daily Mirror believe the former FC Porto man could fall down the defensive pecking order under new boss Rafa Benitez.

Louis van Gaal saw his senior central defensive options all struggle for form in 2014/15, with Phil Jones, Chris Smalling and Jonny Evans all failing to impress, while new signing Marcos Rojo was still adapting to life in the English top tier.

The Man United manager opted to blood youngsters Paddy McNair and Tyler Blackett, and will have been pleased overall with the efforts they put in.

Man United have failed with bids to sign Pepe’s Real Madrid team-mate Sergio Ramos (via Sky Sports), and Louis van Gaal could be tempted by the offer of the Portuguese international, who could help to beef up his back-line, while also contributing considerable experience to the Red Devils defence.

Pepe moved to the Spanish capital in July 2007 and has made 285 appearances for Real Madrid, helping the club to two La Liga titles and a Champions League triumph, among a host of honours.

Louis van Gaal helped Man United to secure a return to the Champions League for the coming campaign, and the additions the experienced manager has made thus far this summer could well help the 20-time English champions to mount genuine bids for major silverware.