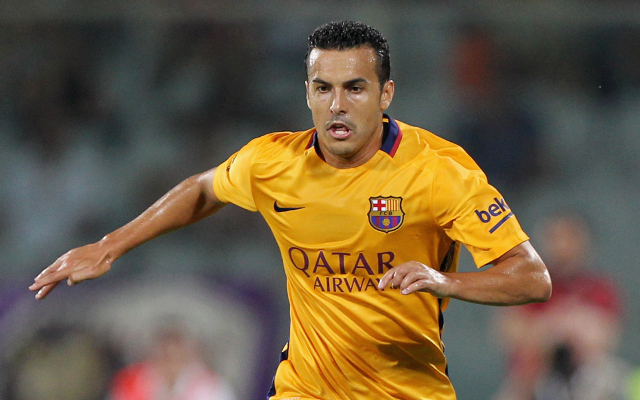 Barcelona winger Pedro is set to play his last game for the Liga BBVA giants ahead of a seemingly imminent transfer to Manchester United.

According to Marca, the Spaniard is set for his final appearance for Barca on Wednesday evening, when Luis Enrique’s side face AS Roma for the 50th Joan Gamper Trophy at the Camp Nou.

The Spanish newspaper claim that no official farewell has been planned by the club; however, he will be given an ‘impromptu send-off ceremony’ after deciding over the past few days of his desire to end his 11-year stay and make the move to Manchester United.

Enrique is said to have been desperate to keep Pedro this summer, but the player himself opted to put his career first, perhaps knowing that he has fallen far down the pecking order behind Neymar, Luis Suarez, Lionel Messi and new arrival Arda Turan, Marca report.

The London Evening Standard claim that the Red Devils are on the brink of sealing a £20m deal for the Spain international, and his arrival could thus be expected to be confirmed within the next few days.

“Chelsea have Eden Hazard, he can always make goals,” as quoted by the Mirror.

“Manchester City have Aguero, it’s the same type. Barcelona have Lionel Messi, Neymar and Luis Suarez. We, as Manchester United, have to compete with these clubs. So we have to look also for these kind of players.”

Pedro could be the galactico signing that van Gaal is craving.