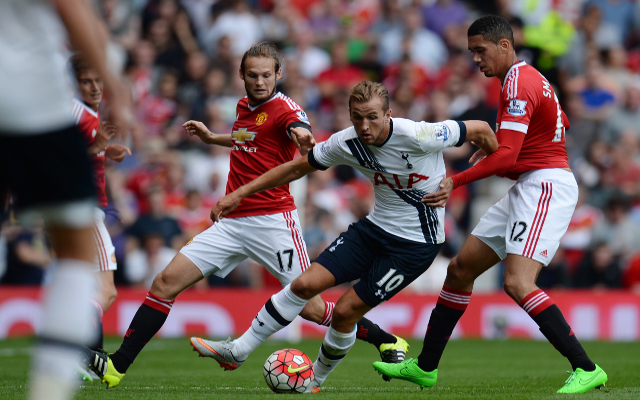 Manchester United have made an approach for Tottenham forward Harry Kane, according to the Daily Mirror.

The 22-year-old England international had an outstanding campaign in 2014/15, netting 31 goals in all competitions, and is arguably Mauricio Pochettino’s only reliable striking weapon.

The Daily Mirror claims that whilst no formal offer has been made by United for the White Hart Lane star, the club have made ‘discreet enquiries’ in relation to their interest in the forward.

Louis van Gaal opted to sell Robin van Persie to Fenerbahce following the Dutch veteran’s fairly average exploits last season, and saw loaned-in forward Radamel Falcao move to Chelsea after his temporary stay was not extended. As such, the Red Devils coach is lacking goal-scoring options, particularly compared to the likes of Chelsea and Manchester City who can call upon players such as Diego Costa, Wilfried Bony and Sergio Aguero.

Wayne Rooney played in an advanced central role during Man United’s opening day win over Tottenham, but the England international spent much of last term in a withdrawn role and impressed greatly. It remains to be seen whether van Gaal will be keen to use the England man as his centre forward this term.

Kane will be hard pressed to hit the heights he reached last term but is clearly still a hugely talented marksman with the potential to achieve bigger and better things, arguably, however the Chingford-born striker will struggle to secure major honours whilst at Tottenham.

He may not, however, be the only forward the 20-time English champions are targeting, with the Mirror reporting that the club are considering stepping up their efforts to bring Karim Benzema to Old Trafford.

The Daily Mirror states that van Gaal wants to bring in a ‘stellar’ signing before the transfer window closes, and a successful move to sign Spurs frontman Kane would certainly fit the bill.