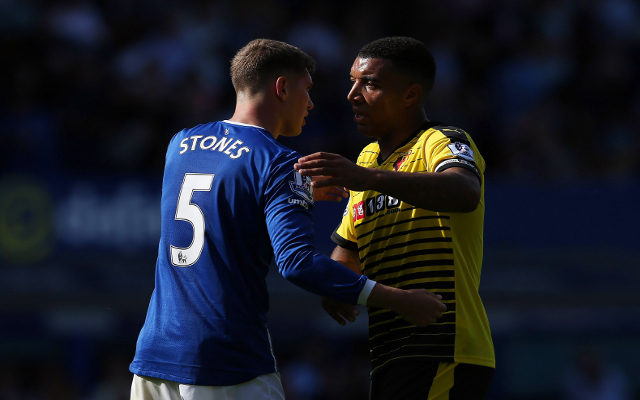 The Stamford Bridge outfit are set to make a £30 million bid for the 20-year-old. This is after they have seen £20 million and £26 million offers turned down by the Toffees, who are adamant that the England international will be staying with them.

Manchester United are also interested in the youngster [Daily Mail], but they appear to be biding their time. The centre-back has come to the attention of the duo after becoming a regular in Roberto Martinez’s side last season. However, the Catalan manager is adamant that the defender is going to stay at Goodison Park, and this could prove a stumbling block in negotiations [Liverpool Echo].

“John Stones is an Everton player full stop,” Martinez said, “we are not a selling club in that respect.”

However, there is still some hope for the interested parties, with the 42-year-old also admitting recently that the former Barnsley man has been unsettled by the talk about his future [Sky Sports].

“Obviously that’s something that you hope that he’ll learn from and you get more mature and those experiences are good experiences,” said the ex-Wigan boss.

“Clearly John is one of the outstanding young talents that we have in the squad and you’re going to get that sort of attraction and that interest from the outside. Everything has been handled in a good manner and I just understand that that’s a positive.”

Everton captain Phil Jagielka has also mentioned that the player is finding it hard to deal with the current speculation about his future [Daily Mirror]. The Red Devils or their London rivals could pounce on this restlessness to sign the highly-rated youngster.

“It is difficult for John, it’s not an easy scenario,” his centre-back partner said.

“It is a bit mind boggling when all sorts of numbers are thrown in the papers and it is a test of character. It is strange the way the transfer window is open while the season starts. It should shut in the first week of August and then everyone has their squad for the season.

“But he is dealing with it really well. I have told him just keep doing what he does because there is a reason why people want to sign you. It is a little bit of test for him now. and we all know he has a good character. He is a level headed lad.

“It is easy for people to let it go to their heads or decide not to be totally committed. But if you look at his performance today then he is a good lad and these little tests in his career will make him stronger.”

During the last campaign, Stones won a place in the Everton first team after Sylvain Distin was dropped following a number of defensive errors. Since then he has gone from strength to strength, and ended up making 23 Premier League appearances last time round.