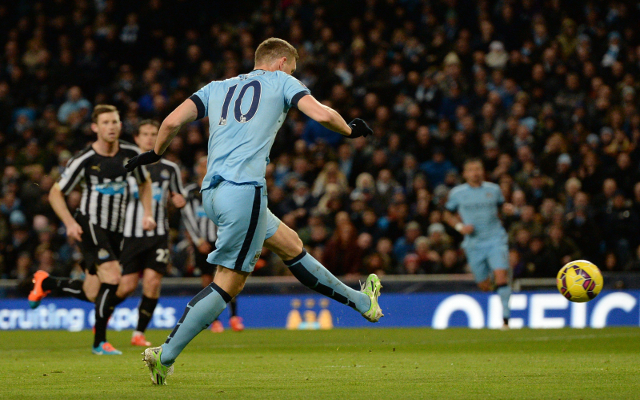 Manchester City striker Edin Dzeko has completed his departure from the club, moving to AS Roma on loan.

The news was broken by the Citizens’ official Twitter feed, although it had been anticipated for some time, with the forward heavily linked with a move away from Manchester [The Guardian].

The Bosnia and Herzegovina international initially leaves Manuel Pellegrini’s side on a season-long loan, although the Giallorossi have the option to make the deal permanent [Goal].

As they broke the news of the forward’s departure, City also delivered a comprehensive tribute for their departing star on their official website, praising him for his considerable contribution to the club.

Dzeko was popular among the club’s fans, and while there were was often used as a backup option for the Sky Blues—rather than as the team’s leading man—he played his part in some memorable victories during the club’s golden era. The forward moved from Wolfsburg in 2011, and went on to make 130 league appearances for the Manchester heavyweights, scoring 50 goals.

He was present for both of the club’s Premier League title victories–first under Roberto Mancini, and then under Manuel Pellegrini. During the latter’s triumph—in the 2013-14 campaign, he bagged 16 goals in 31 outings, while he scored 14 in 30 in the 2011-12 season.

Wilfried Bony was signed in January and starred in the Citizens’ EPL opener against West Bromwich Albion, while new boy Raheem Sterling should provide goals himself and effective service for leading man Sergio Aguero.