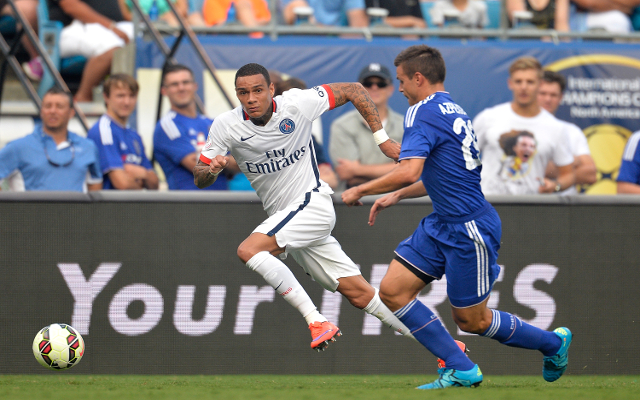 Chelsea have made an approach for PSG defender Gregory van der Wiel, according to French source Le Parisien.

The 27-year-old right-back found himself jostling for a place with Serge Aurier, last season and found himself on the bench for PSG’s opening Ligue 1 fixture of 2015/16, Laurent Blanc’s side securing a narrow 1-0 win away at Lille.

Jose Mourinho can usually rely upon consistent performer Branislav Ivanovic as his first choice right-sided defender, but the Serbian’s shocking display in Chelsea’s opener against Swansea City would have been hard to ignore.

Swansea City winger Jefferson Montero humbled the 31-year-old Blues star throughout the encounter, beating Ivanovic for pace and using his trickery to repeatedly get past the defender before causing Chelsea all sorts of problems.

Gregory van der Wiel impressed at Ajax before moving to the French capital and has helped PSG to three successive Ligue 1 titles during his time at the Parc des Princes.

He made 22 starts last term, but largely benefited from Aurier’s injury concerns and his jaunt to Equatorial Guinea during the Africa Cup of Nations. This season, it appears as though the Ivorian will be Blanc’s first-choice right-back.

Le Parisien also points out that Louis van Gaal previously pursued van der Wiel, a player the Manchester United boss knows well from his time in charge of the Dutch national side. However, the club recently signed Matteo Darmian; the former Torino man put in a masterful display during his Premier League debut against Totenham on Saturday, and as such the Old Trafford side are unlikely to be in need of a new right-back.