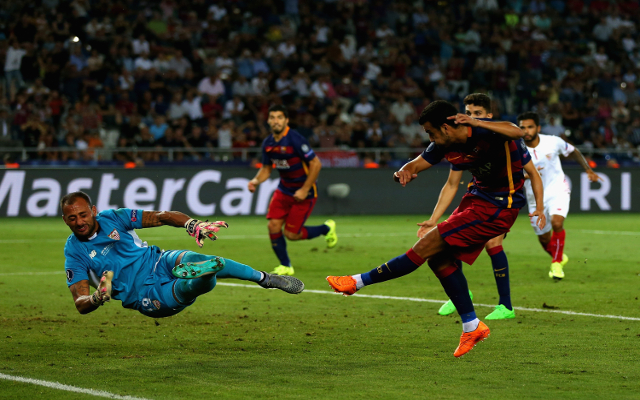 Man City are to battle Manchester United in a bidding war for Barcelona forward Pedro, according to Spanish source Marca.

The 28-year-old Spanish international has seen his first-team opportunities restricted by the arrival of Luis Suarez last summer and even failed to secure a spot in Luis Enrique’s starting eleven for Tuesday night’s Super Cup encounter with Sevillam even though Neymar was ruled out through injury.

Pedro came off the bench to net the winner in Tbilisi, but is said to want to leave the Nou Camp (via BBC Sport) and there is no shortage of interest in the experienced attacker.

City boss Manuel Pellegrini already has a host of attacking options on his books, but could see Pedro as a superior wide-attacking option to the likes of Jesus Navas and Samir Nasri, with new signing Raheem Sterling starting the club’s opening Premier League fixture against West Bromwich Albion on the left-flank.

This would then leave Sergio Aguero as a central striking weapon, a position filled by Wilfried Bony during Monday night’s 3-0 win over the Baggies, as the Argentine has been given more time to rest following his Copa America exertions.

Pedro’s goal against Sevilla was the Tenerife-born forward’s 99th for Barcelona in 319 appearances.