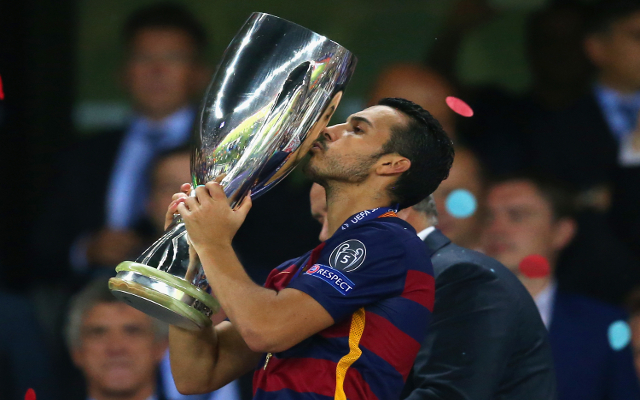 Nou Camp star Pedro has told Barcelona he wants to leave for pastures new and the Daily Mirror claim that Man United have already agreed personal terms with the 28-year-old forward.

Luis Enrique’s decision to field a mouthwatering three-pronged front-line comprising Luis Suarez, Lionel Messi and Neymar has left Pedro warming the bench and it’s not a surprise that the long-serving Barcelona star is looking to move on.

Despite Neymar being sidelined with the mumps it appears Enrique opted to snub Pedro as he selected Rafinha for Barcelona’s Super Cup Final encounter with Sevilla on Tuesday night.

Pedro did however come off the bench to net the extra-time winner to hand Barcelona a 5-4 win in Tblisi, the Tenerife born attacker’s 99th goal for the Catalan giants.

Man United are yet to trigger Pedro’s £23m release clause and seemingly Barcelona are not ready to allow the experienced star to leave for a penny less.

Louis van Gaal has sold Angel Di Maria to PSG in a £44.5m deal so could well afford to make the requisite offer and would do well to bring in the versatile Barcelona man, who can play out wide as well as in a central striking role.