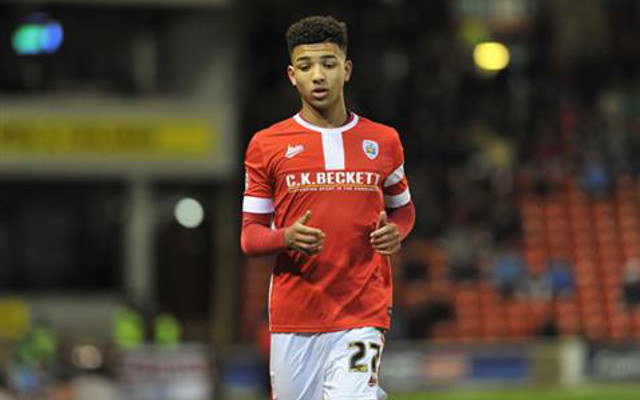 Everton appear to have beaten Manchester United to the signing of Barnsley star Mason Holgate, reports the Daily Express.

The 18-year-old was on trial with the Red Devils earlier in the summer, but it now seems that the Toffees are going to beat them to his signature in a £1 million deal. Goodison Park boss Roberto Martinez believes that the defender, who can play on the right or centrally, is joining a highly talented group of youngsters at the club.

Recent seasons have seen Ross Barkley, John Stones, Brendan Galloway, Luke Garbutt, and Tyias Browning break in to the first team squad at the Merseyside club, and Holgate could be follow in their footsteps.

“Mason is 18-years-old and we are hoping to conclude it,” said Martinez, “He has already played 20 games in League One. It shows the potential that he has.

“We would be delighted to be able to do that deal. We have agreed terms with Barnsley and it would be a phenomenal young prospect coming into that golden generation we feel we have at this football club. It would be a good one for the future.”

The last player who Everton signed from Oakwell was Stones, who has gone on to be regular in the Toffees’ starting line up and break in to the England squad. However, there are now rumours that the 21-year-old could join Chelsea or Man Utd [Daily Star], and Martinez will be desperate to hold on to the centre-back.