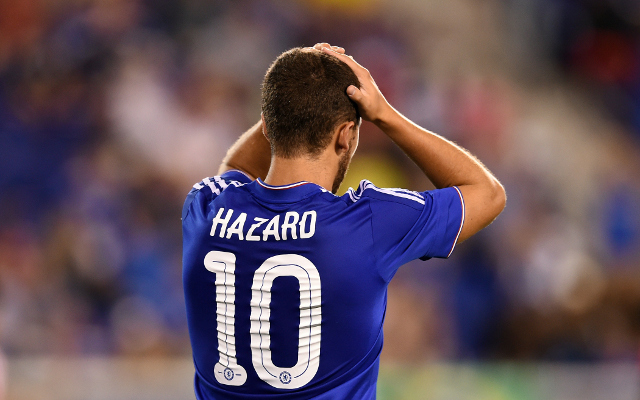 Manchester City captain Vincent Kompany is hoping that Chelsea star Eden Hazard gets diarrhoea before their match on Sunday, reports the Daily Mirror.

The pair play together for the Belgium national team, and the defender knows exactly how good the winger is as a result. The 29-year-old is so worried about his compatriot that he doesn’t think manager Manuel Pellegrini should even bother trying to make a plan to stop last season’s Footballer of the Year.

“You’d almost hope that Eden Hazard would have diarrhoea,” Kompany said, “Now let’s be serious, you can’t underestimate the impact he has on Chelsea. You’ll expect he would have a dip in his performance level.

“Last week, against Swansea, he maybe didn’t play his best first half, but when they were reduced to 10 men, he was the only one who was dangerous. Because he ran past three-four defenders. You can have as many tactical plans as you want, if Eden starts running, it’s chaos.

“He’s at a level where he decides how good his team are. [Lionel] Messi and [Cristiano] Ronaldo are stats animals. If you look at their talent, you can compare Eden to them. But they score a lot. Unbelievable.”

He continued: “Could I say he will never reach their scoring levels? I would never bet on that. Eden has made so much progression that last few years that it is possible he reaches their level. It wouldn’t even be a bad performance when he ends up just behind Messi and Ronaldo.”

The Citizens go in to the match on the weekend knowing that they have made a better start to their title challenge than the Stamford Bridge outfit. The Sky Blues beat West Brom 0-3, while their London rivals only managed a 2-2 draw with Swansea City.

Moreover, Jose Mourinho and co. have been mired in controversy since the match for the Portuguese’s argument with club doctor Eva Carneiro and Head Physio Jon Fearn. The 52-year-old was angered when the pair went on to the pitch to treat Hazard after a knock, meaning the player had to depart the field and leave his team with only nine players after the earlier sending off of Thibaut Courtois.