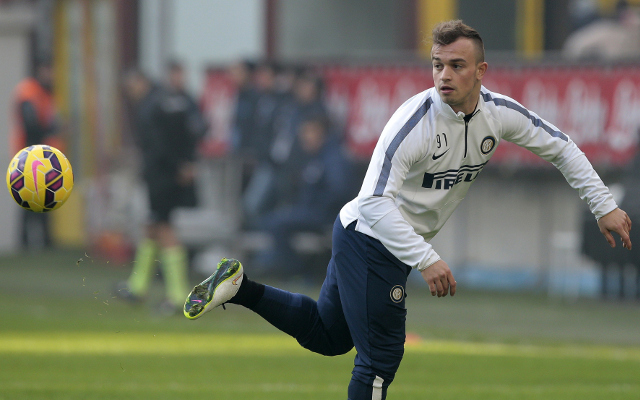 Stoke City supporters have been denied the chance to see new signing Xherdan Shaqiri in action on Saturday afternoon against Tottenham Hotspur as it has been revealed the winger is to serve the remainder of his suspension from his time in Italy.

The Switzerland international completed his move to the Potters earlier in the week for a club record £12million fee and was expected to make his debut at White Hart Lane this weekend.

However, the Football Associations’ official Twitter account broke the news on Friday afternoon that the 23-year-old will be unavailable for the trip to North London because he is still suspended after being sent off for former club Inter Milan in an Coppa Italia fixture last season.

Stoke City’s Xherdan Shaqiri is currently subject to a one-match domestic suspension so is unavailable for selection this weekend. 1/3

Therefore, Shaqiri is unavailable for selection until the completion of Stoke’s next competitive first team match. 3/3

Shaqiri will now be expected to make his bow in the Barclays Premier League on August 22 when newly-promoted Norwich City are the visitors to the Britannia Stadium.