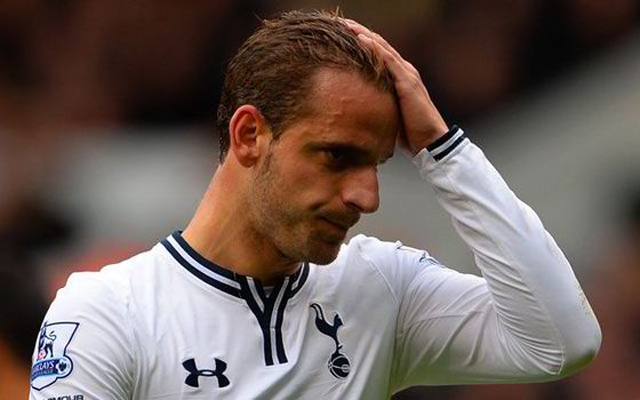 Roberto Soldado‘s imminent departure from Tottenham and the Barclays Premier League altogether has been a hot topic on social media.

The Spaniard is set to end two miserable seasons in North London by joining Liga BBVA outfit Villarreal after the two clubs agreed a fee for the 30-year-old on Friday evening.

Soldado’s Spurs career did get off to a great start as he netted the winner from the penalty spot against Crystal Palace on his debut, however, his time in England will ultimately go down as an unsuccessful risk as he managed to score a further six goals in the league in two full seasons at the club.

With the Lilywhites splashing out a club record fee of £26million for the striker in the 2013 summer transfer window, they are expected to take a massive loss in the deal with Villarreal and fans of rival clubs on Twitter have been poking fun at Soldado’s struggles.

I knew Soldado would flop, but he flopped harder than I ever thought possible. Shame ????????

Roberto Soldado to Villarreal What a flop he was

Soldado who was bought for £24m is heading back to La Liga. As a premier league flop. Giroud who cost £12m less gets more stick than Soldado

Roberto Soldado: 16 goals in 76 games for Tottenham. Awful record for a £26m signing. The worst striker to ever play in the Premier League

You may not miss Soldado, but he will miss you. Literally.