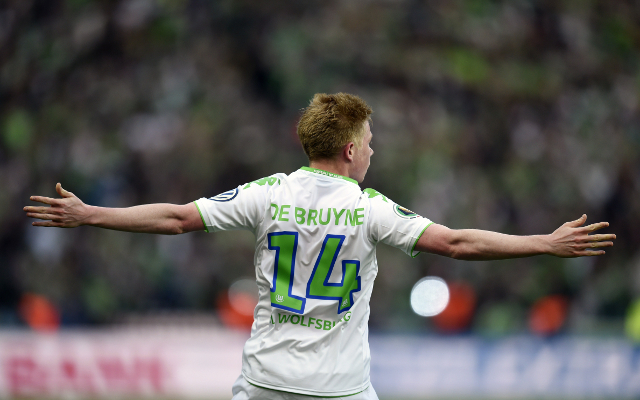 However, the Sky Blues are still £7 million short of what the German side want for the former Chelsea man. It is the Citizens’ second bid for the player, after seeing a £47 million offer rejected, and the Citizens also have a £200,000-a-week six-year contract lined up, according to the Mirror.

The 24-year-old could help Manuel Pellegrini to enhance his already top-class attack.

The likes of Sergio Aguero, David Silva, Jesus Navas and Samir Nasri helped the Sky Blues to score the most goals in the Premier League last season, but the north-west heavyweights must still improve if they are to beat Chelsea to the title.

De Bruyne could be the man to do that, having scored ten goals and managed 20 assists in 34 Bundesliga matches last time round.

With Raheem Sterling having already arrived at the Etihad Stadium, the Belgium international could complement the ex-Liverpool star by feeding him with the kind of through-balls that Sterling, with his lightning pace, thrives on.

Indeed, the prospect of the pair performing in tandem for City is tantalising.

However, if City are unable to sign the midfielder, then they could attempt to sign Barcelona ace Pedro instead.

Respected journalist Guillem Balague claims that they could attempt to sign the Spain international from under fierce rivals Manchester United’s noses [Sky Sports].

The 28-year-old has seen his opportunities at the Nou Camp dry up, with Lionel Messi, Luis Suarez, and Neymar all playing ahead of him, and may look to leave the Blaugrana to get some more first team action.