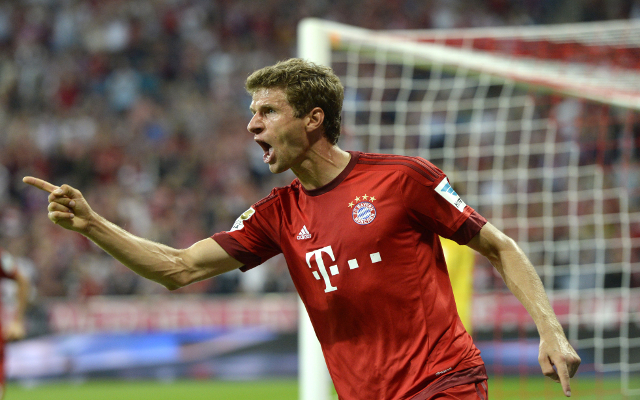 Manchester United have made a £50m bid for Bayern Munich forward Thomas Muller, according to German source Kicker (via The Daily Telegraph).

Old Trafford boss Louis van Gaal knows the experienced German international well from his time in charge at the Allianz Arena, during which the Dutch manager offered Muller a chance to emerge onto the scene during the club’s double-winning campaign of 2009/10.

Van Gaal finds himself short of forwards following the sale of Robin van Persie to Fenerbahce and the departure of Radamel Falcao following the end of his loan move. Thomas Muller would represent a significant addition if the Premier League side can pull it off.

United have already conducted one high-profile Bayern Munich raid this summer, with the capture of midfield general Bastian Schweinsteiger earlier in the transfer window.

Van Gaal likes to adopt a three-man attack, and versatile World Cup-winner Muller can fill positions on the flank or in a central striking role.

The lanky marksman is a regular goal-scorer, having netted in excess of 20 goals in each of the past three seasons, and he started the latest Bundesliga campaign with a bang by scoring twice in Bayern Munich’s opening weekend 5-0 victory over Hamburg.

Thomas Muller is a player of real quality and, seemingly, a player Bayern Munich intend to keep hold of, with chief executive Karl-Heinz Rummenigge making it abundantly clear, in quotes covered by the Daily Telegraph, that the player is not for sale.

“Muller is not for sale. Our English colleagues seem to be unable to spend all of their money,” the administration and former Germany striker began.

“It’s difficult. Everyone knows our old friend Louis van Gaal. He is very stubborn in those things.

“Maybe he thinks that there is a price where Bayern will start to ruminate but there is no price at all,” Rummenigge concluded.