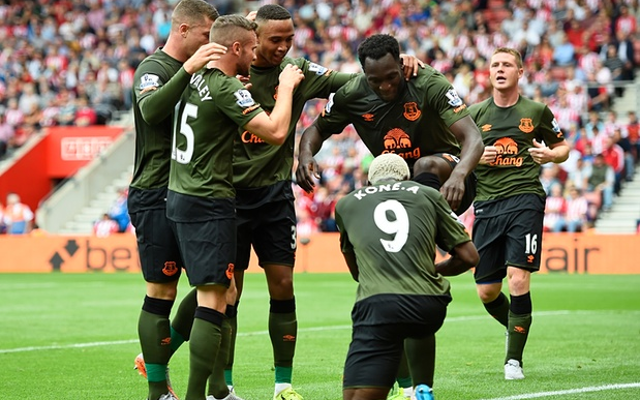 It was quite a day for Everton striker Romelu Lukaku, who both destroyed Southampton and made a friend of a Saints fan after one devastating strike almost beheaded a supporter.

Roberto Martinez on this Lukaku incident: ‘Maybe he’ll have to hit a woman in every game.’ http://t.co/D3qaOjUSys pic.twitter.com/Syp0u946ep

During the pre-match warm-up, the Belgian attacker sent a wayward strike into the midst of the home supporters.

The powerful effort struck the face of a Southampton fan, but the former Chelsea striker felt compelled to amble up into the stands to apologise to his victim.

Lukaku clambered up into the crowd, seeking out the female supporter and giving him a lengthy hug. He then shook the hand of the male fan sat next to her, ensuring that there were no feelings as hard as the forward’s belter.

However, while Lukaku might have made friends with these two Saints supporters, he made enemies of every other home fan by delivering a sublime display to down Ronald Koeman’s outfit.

The powerhouse scored twice as Everton registered a magnificent 3-0 victory, proving there was no hang over following their underwhelming 2-2 home draw with Watford on the opening day.