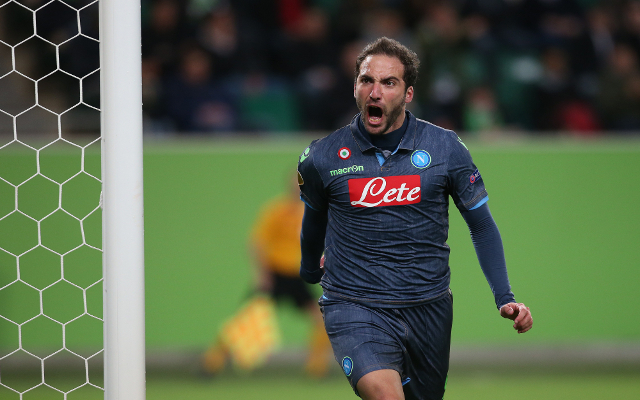 Chelsea boss Jose Mourinho has set his sights on Napoli forward Gonzalo Higuain according to Fichajes (via the Metro).

The 27-year-old French-born Argentina international has proven a big success since leaving Real Madrid for Naples in July 2013, scoring 24 goals in his first season at the San Paolo followed by a 29 goal haul in 2014/15.

Jose Mourinho had to rely heavily on Diego Costa for an end product last season and the loan capture of off-form Colombian Radamel Falcao may not be enough to resolve the situation.

Falcao scored just four goals during his loan spell at Manchester United, and is a shadow of the player who was scoring goals at will in Portugal, Spain and France.

Similarly, the Pensioners have lost Didier Drogba, and while Loic Remy is an able substitute, it remains to be seen whether he could shoulder the goal-scoring burden of a club challenging for the title.

Fichajes, via the Metro, claim that Higuain has a massive €90m (£64m) release clause, and although Chelsea haven’t spent a great deal yet this summer, one wonders if the West London side are ready to smash the British transfer record to trigger the Serie A star’s buyout sum.

Mourinho knows Higuain well from his time in charge at Real Madrid, and the South American forward proved very effective whilst at the Spanish giants, scoring 107 goals in 190 La Liga appearances. However, he didn’t always command a regular spot in the team’s starting eleven