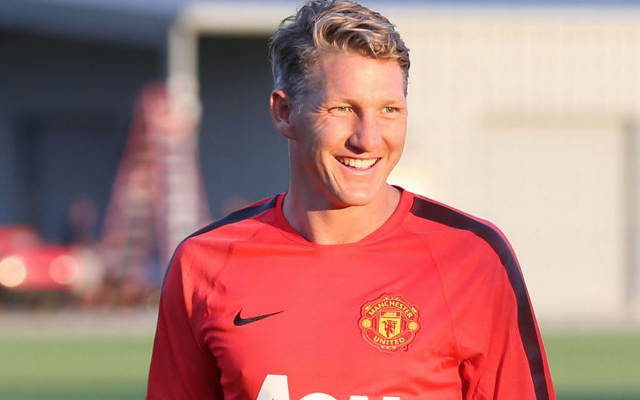 New Manchester United signing Bastian Schweinsteiger has thanked teammate Marouane Fellaini for agreeing to a change of squad number ahead of the new season.

The German international, who signed from Bundesliga giants Bayern Munich earlier in the summer, wore the no.23 shirt during pre-season but has since been allocated his favoured no.31 squad number that had been in use by Fellaini since his arrival at Old Trafford two summers ago.

Schweinsteiger took time out of his busy schedule to thank the Belgian for the nice gesture as it has helped him to settle to life in English football:

“I was happy that the coach gave me the No.31 and was really surprised as well,” the German said [via BBC Sport]

“So thank you to Felli too. For me, I played there since I played my first game for Bayern and 31 means a lot to me,” Schweinsteiger added.

Fellaini will be available for United UEFA Champions League play-off first-leg against Club Brugge on Tuesday night as his suspension following his red card against Hull City on the final day of the 2014-15 campaign only applies to domestic competition.

Meanwhile Schweinsteiger will be hoping for a first start in United colours after coming on as a substitute in the club’s opening two games of the season.