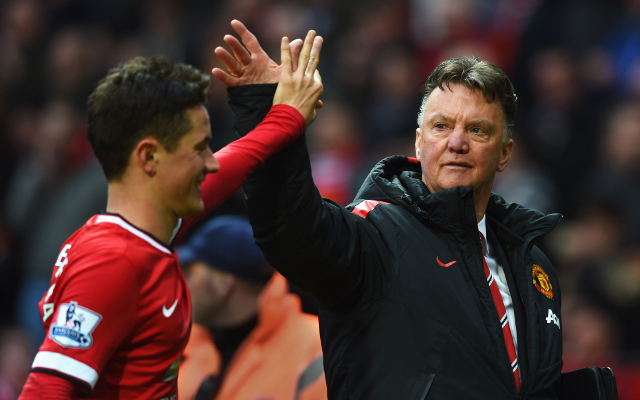 Manchester United manager Louis van Gaal has revealed why midfielder Ander Herrera has not started in either of the club’s opening games of the new Barclays Premier League season.

The Spaniard, who joined the club from Liga BBVA outfit Athletic Bilbao last summer, has been a surprise omission from the starting XI for games against Tottenham Hotspur and Aston Villa, despite his strong end to his debut season.

With new signings Morgan Schneiderlin and Bastian Schweinsteiger battling it out for a place alongside Michael Carrick at the heart of the midfield, Herrera has been overlooked for the role just behind lone striker Wayne Rooney as van Gaal has opted for Memphis Depay and Adnan Januzaj in that position.

Many United supporters have questioned why the 26-year-old has been limited to cameo roles of the substitutes bench so far this season, however, van Gaal says the decision is purely tactical and hinted at his unwillingness to change:

“I like a second striker in that position (behind Rooney) more than a third midfielder,” the Dutchman said [via Manchester Evening News].

“That is why, for example, Herrera is not playing but is always coming on as a substitute, because he is more of a controlling midfielder there,” van Gaal added.

The Red Devils are back in action on Tuesday night as they face Belgian outfit Club Brugge in their UEFA Champions League play-off round first-leg tie at Old Trafford.