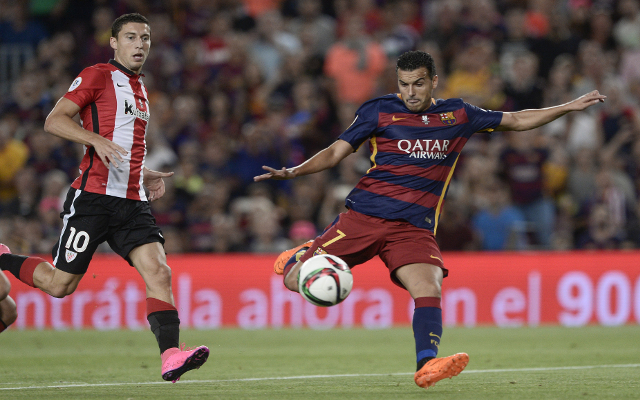 Manchester United chief executive Ed Woodward has flown into Barcelona this week to complete the long-awaited signing of Nou Camp forward Pedro, according to the Daily Mirror.

The 28-year-old started both legs of the Spanish Super Cup final against Athletic Bilbao, which Barcelona lost 5-1 on aggregate, but has struggled to retain a foothold in Luis Enrique’s starting eleven.

Pedro has only featured in recent fixtures due to Neymar’s absence-the Brazilian is suffering with the mumps-and made just 15 La Liga starts last season.

Enrique has opted to field a mouthwatering striking trio of Neymar, Lionel Messi and Luis Suarez, and saw Barcelona romp to an impressive Liga BBVA, Copa del Rey and Champions League treble in 2014/15, with Barcelona’s attack proving crucial to their success.

The three players netted an astonishing 122 goals between them and as such, it’s fair to say that Enrique’s decision to use Pedro in a supporting role has paid off for the Catalan side.

The Daily Mirror claim Man United are ready to meet Pedro’s £21.7m release clause, and the versatile Spanish international could well represent a great deal for Louis van Gaal and give the forward another option in the final third.

Pedro can play in a wide or central striking role, and is a player with a wealth of top-level experience.

The Tenerife-born attacker has netted 99 goals for Barcelona, including one scored against Man United in the 2011 Champions League final, and could well become van Gaal’s sixth summer signing following the captures of Memphis Depay, Matteo Darmian, Bastian Schweinsteiger, Morgan Schneiderlin and Sergio Romero.