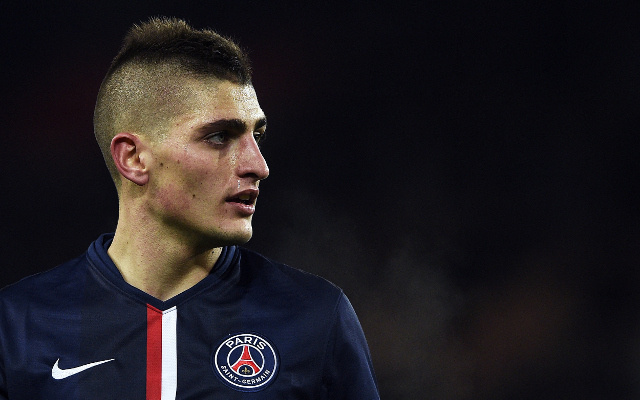 PSG star Marco Verratti has talked up a possible move away from the French capital, amid interest from Barcelona, Inter Milan, Arsenal, and Manchester United, reports the Daily Express.

The 22-year-old is a key player at the Parc des Princes though, having made 50 appearances in all competitions for the club last season. As such, it is unlikely that Laurent Blanc will allow the player to leave unless he asks for a move.

“You never know what can happen in the future,” said Verratti.

“I’m doing well where I am and I’m not thinking about changing clubs. I’ll begin to consider leaving on the day that I no longer feel good at PSG or when the club decides to sell me.

“England, Spain and a return to Italy are possible options. The project is the most important thing.”

The Italy international is one of the best young players on the continent, but does have an unfortunate penchant for picking up yellow cards. Last season he received 12 cautions in Ligue 1, and in the campaign before, he was given 10.

Even with this flaw, the former Pescara man has the passing and dribbling ability to be a star in either of the Premier League sides interested. The Blaugrana and the Old Lady could also do worse than sign the player, but the former are thought to be waiting until 2016 to make their move [Goal].

A more likely departure from the Ligue 1 champions is Ezequiel Lavezzi, who has been offered out to various Premier League sides after the arrival of Angel Di Maria from Old Trafford, according to Tuttosport [via Daily Express].

Arsenal, Tottenham, and West Ham are apparently among the clubs given the chance to sign the Argentina international, who scored nine times in 48 games for the Parisian outfit in the last campaign.