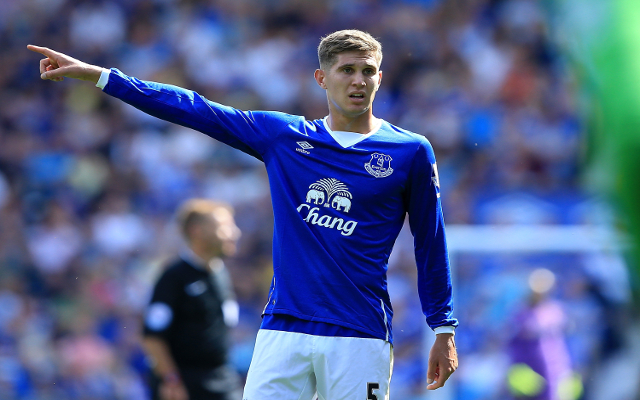 Old Trafford boss Louis van Gaal will look to beat Chelsea in the race to sign Everton defender John Stones, according to the Daily Star.

Manchester United have collected back-to-back clean sheets from their opening two Premier League fixtures, although van Gaal has opted to use Dutch utility man Daley Blind alongside in-form England man Chris Smalling at the heart of his defence.

Van Gaal’s willingness to use Blind in a role that isn’t best suited to the former Ajax man is perhaps a sign that the United manager isn’t entirely happy with his existing defensive options.

Everton want £40m for 21-year-old England international John Stones (the Telegrah via Daily Star, as above) and thus far Chelsea have failed to match that fee, the Blues seeing bids for the Toffees star fail (via ESPN), and the Daily Star claim that van Gaal has turned his attention to the former Barnsley man after his push to capture Sergio Ramos fell through.

Chelsea have shipped in five goals in their opening two matches of the Premier League season and as such, Jose Mourinho’s need for a fresh central defensive option could be even more immediate than van Gaal’s.

Mourinho opted to sub John Terry at half-time during Sunday’s 3-0 Chelsea defeat at Man City, and replacement Kurt Zouma didn’t fare much better, with the Pensioners shipping two more in the second half.

John Stones is a versatile defender, and the fact that the Everton youngster is adept at filling a right-back berth could be of interest to Mourinho given just how exposed Branislav Ivanovic has looked this season with both Swansea City’s Jefferson Montero and Man City forward Raheem Sterling proving something of a nightmare for the Serbian.