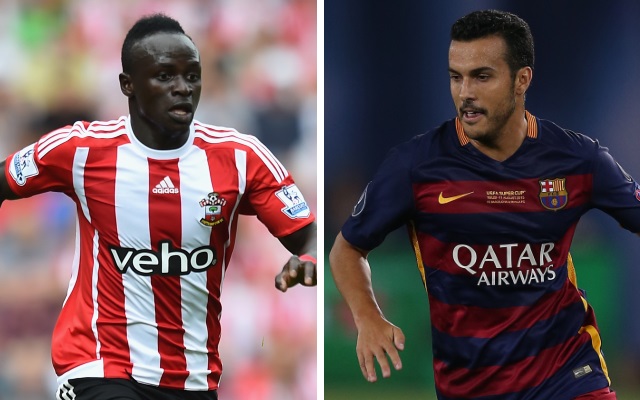 According to Telegraph Sport, Southampton star Sadio Mane has emerged as a shock transfer target for Manchester United.

It’s understood that the Red Devils are set to switch their attentions to the Senegal international after seeing a deal for Pedro collapse as Premier League rivals Chelsea have swooped in and are now favourites to land the Barcelona winger before the transfer window closes [via Marca].

United are likely face a tough battle to convince the Saints into selling another one of their star players after losing both Nathaniel Clyne and Morgan Schneiderlin this summer.

If Mane does arrive at Old Trafford before September 1, would he represent a better option than Pedro?

One crucial area in which Mane holds the advantage is age; at 23-years-old, the ex-Red Bull Salzburg striker is still to reach his peak, while Pedro, at 28, has been playing at the highest level for the past seven seasons and that could soon start to take its toll on his body.

Based on last season’s statistics, Pedro had a bigger impact for his club, despite finding first-team opportunities at the Camp Nou limited following the arrival of Luis Suarez.

There is a case that Mane is the better option due to him having played in the Premier League and has already had his settling-in period, therefore he would be less of a risk.

However, despite Mane’s experience, its difficult to look past Pedro being the better signing for the Red Devils as his ability to find the back of the net at in big games for both club and country would have been a major boost to Louis van Gaal’s side.

The signing of the forward could have given them a huge push in their bid to be crowned champions of England, whereas Mane remains a work in progress.

All stats via WhoScored.