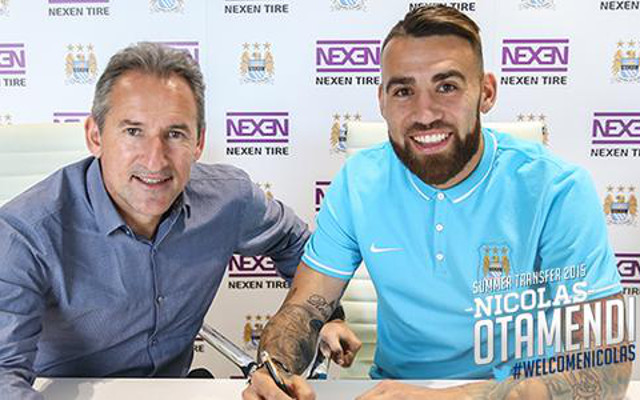 The tough-tackling defender became City’s fifth signing of the summer after joining from Liga BBVA outfit Valencia on Thursday and increases the number Argentinians in the first-team squad at the Etihad Stadium to five alongside Aguero, Pablo Zabaleta, Martin Demichelis and Wily Caballero.

Otamendi’s arrival at the club further strengthens the defensive options for manager Manuel Pellegrini, who has seen the partnership of Vincent Kompany and Eliaquim Mangala keep clean sheets in their opening two games of the new Barclays Premier League season against West Brom and Chelsea respectively.

The 27-year-old’s decision to join City ahead of rivals Manchester United has been a hot topic on social media and his international teammate Aguero  took to Twitter and gave him a warm welcome:

Otamendi could be involved in the City squad for the trip to Merseyside on Sunday as his new club face Everton at Goodison Park looking to maintain their 100% start to the season.