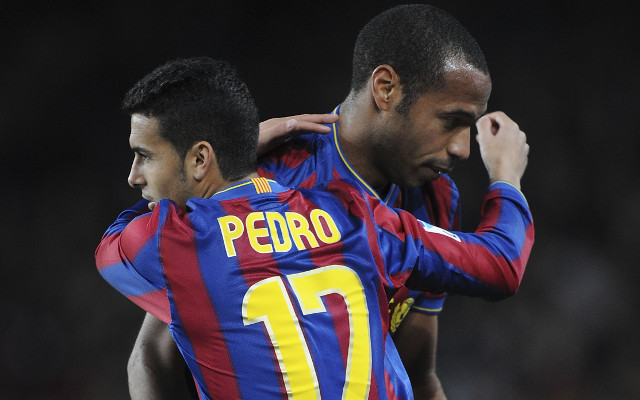 Reports on Thursday sensationally revealed that Chelsea had beaten Manchester United to the signing of £21million Barcelona winger Pedro Rodriguez.

And Thierry Henry, Arsenal legend and Sky Sports pundit, believes that the Blues have signed the ideal player.

Henry played with Pedro during his three years at the Camp Nou, and has hailed the Spaniard as a “perfect team-mate and perfect professional”, as his move to Stamford Bridge reaches its final stages.

“The perfect team-mate, the perfect professional – he is that guy,” he told Sky Sports.

“He pressures from the front, but he’s also the player that any manager would love to have. You know what you’re going to get with Pedro, always 100 per cent.

“The way he plays, the way he trains, he doesn’t talk, he doesn’t create any problem for you, he’s a team player who had exactly what you would love to have as a team-mate, as a player, or if you’re the boss.”

Pedro is said to have been in London yesterday to undergo his medical with the English champions, and his deal is expected to be confirmed within the next few hours.

The news came as a huge shock to Red Devils supporters following a summer filled with speculation that he would be heading to Old Trafford.