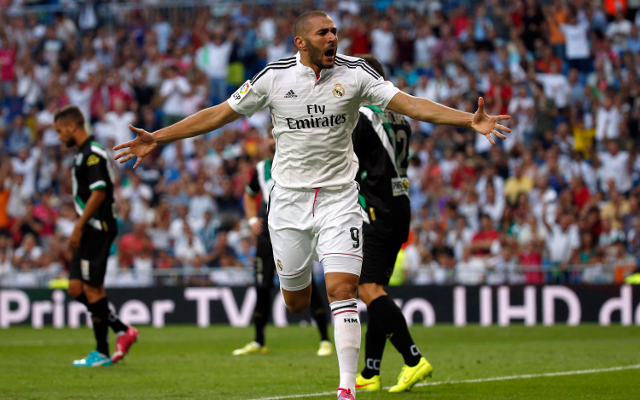 Arsenal are set to complete the signing of Real Madrid forward Karim Benzema according to respected Italian journalist Emanuele Giulianelli, who claims the French international will be unveiled as a Gunners signing ahead of the North London side’s clash with Liverpool on Monday night.

Arsenal are believed to have rented a Gulfstream private jet to accommodate Benzema on Sunday evening.

He will have a medical Monday early afternoon and be confirmed just before kick off. He will stay in 5 stars hotel London center.

There has been growing speculation about Arsenal’s ongoing interest in 27-year-old Bernabeu star Benzema for some weeks now and numerous reports have stated that a deal is near but Real Madrid have continued to state that the former Lyon man is still a key part of their plans.

However there has been talk of newly appointed manager Rafa Benitez opting to use either Cristiano Ronaldo or Gareth Bale in a central striking role and any move to do so would leave Benzema warming the Real Madrid bench.

Though Olivier Giroud scored a quality goal against Crystal Palace last weekend it would be fair to say the Arsenal fan favourite is hardly a prolific marksman, the 28-year-old having scored 59 goals in 136 appearances since his move to the Emirates Stadium, and this fact has heightened talk of Wenger’s interest in Benzena.

Benzema is one of Europe’s most consistent goal-scorers, the La Liga star having scored 20+ goals in each of the past five seasons, and no doubt Arsenal fans would be very happy about the prospect of the Real Madrid star spear-heading their Gunners attack in the near future.