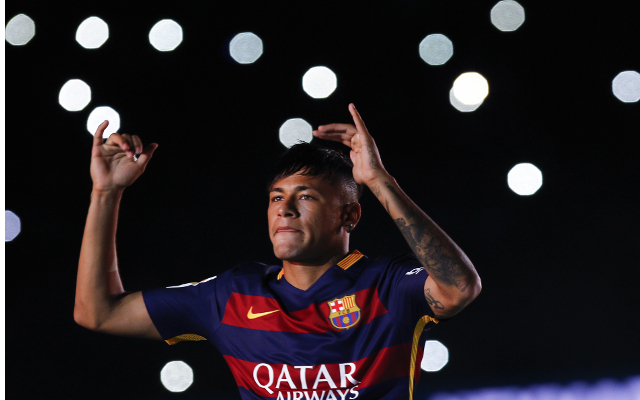 Manchester United are in ‘secret’ talks to sign Barcelona star Neymar, according to The Sun.

The 23-year-old played a pivotal role in helping Barcelona to a treble of La Liga, Copa del Rey and Champions League titles last season, netting 39 goals in all competitions and forming part of a mouth-watering attacking trio alongside Lionel Messi and Luis Suarez, and as such, it’s hard to fathom why the Brazilian would consider leaving the Nou Camp.

Barcelona saw Pedro leave for Chelsea earlier this week and as such the sale of Neymar would be even less likely as doing so would leave Luis Enrique short on options in the final third.

Manchester United had been interested in signing Pedro (via the Daily Telegraph) and also saw another long-term target, Argentine defender Nicolas Otamendi, opt to join Premier League rivals Man City (via The Daily Mirror) but it’s worth remembering that Louis van Gaal has already brought in a host of top-quality talents. As such, despite the Dutchman losing out in moves for the aforementioned pair, the Old Trafford side are still capable of mounting a push for major honours in 2015/16.

Van Gaal is, however, short on striking options following the sale of Robin van Persie to Fenerbahce and Neymar would, in theory, be an ideal man to boost Man United’s fire-power.

The Sun claims that chief executive Ed Woodward, whilst in pursuit of Pedro, has made a discreet approach for Neymar, but Barcelona are reportedly resisting any attempts by Manchester United to capture the former Santos man.