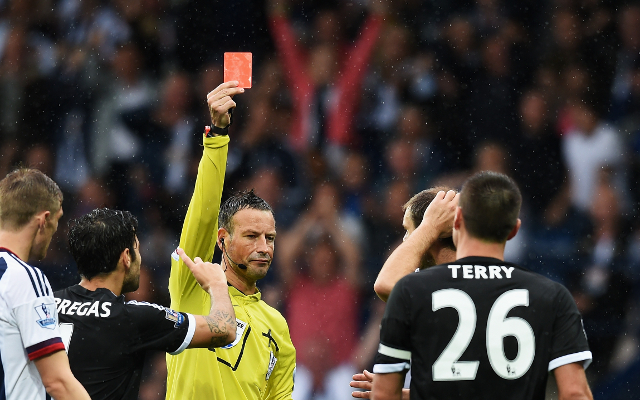 The Blues captain was given his marching orders in the early stages of the second half at the Hawthorns after bringing down Baggies striker Salomon Rondon on the edge of the visitors penalty area.

Following the game manager Jose Mourinho refused to blame  the 34-year-old and Redknapp believes Courtois should shoulder some of the blame for allowing Terry to get exposed by the pace of the Venezuelan centre-forward:

“I think Thibaut Courtois has got to look at his position,” the former Liverpool midfielder said on Sky Sports.

“He was going back and forward and doing the hokey cokey.”

“You’ve especially got to know your players. When it’s John Terry in a straight race with Rondon he’s in trouble.”

“If that was Kurt Zouma you could let him take control of the situation, but because it’s John – and maybe the lack of pace he has – I think Courtois has got to be five or six yards higher up and come and clear that away,” Redknapp added.

Terry is now set to miss the Blues’ next fixture against London rivals Crystal Palace at Stamford Bridge on Saturday afternoon and there is still speculation regarding his future at the club following events over the past week.

After being hauled off at half-time against Manchester City a week ago, there has been rumours that the club are keen to bring in highly-rated Everton defender John Stones as his potential long-term replacement.

It remains to be seen whether the former England international will still be an automatic choice under Mourinho if a deal for the Toffees star is successful.