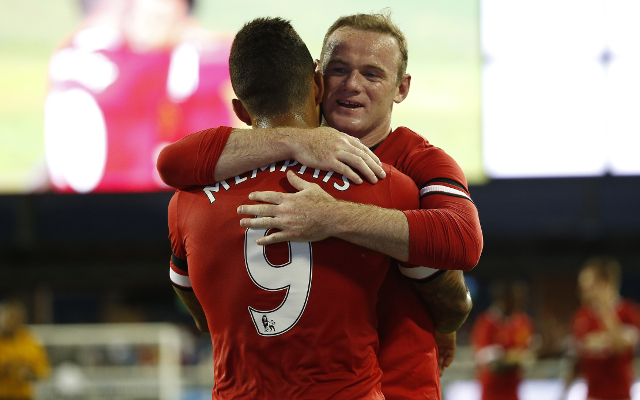 Manchester United summer signing Memphis Depay has hailed the influence of Wayne Rooney as he adjusts to life in England.

The Dutchman signed for the Red Devils from last season’s Eredivisie champions PSV Eindhoven after an impressive campaign in which he topped the goalscoring charts in Holland with 22 goals in just 30 appearances.

Since his arrival in Manchester, the 21-year-old has shown flashes of his undoubted talent and opened his account for the club with a brace in the 3-1 victory over Belgian outfit Club Brugge in the UEFA Champions League first-leg playoff tie at Old Trafford last week.

Depay is regarded as one of the hottest prospects in European football at the moment and is expected to follow in the footsteps of Rooney, who had to deal with similar media spotlight as a youngster.

The new United no.7 told the club’s official website about how influential the England international has been in helping him to settle into his new surroundings.

“Wayne Rooney helps me a lot,” the Dutchman said after Saturday’s goalless draw against Newcastle United.

“He has a lot of experience. He already knows everything about the football world so if I have any questions I can ask him,” Memphis added.